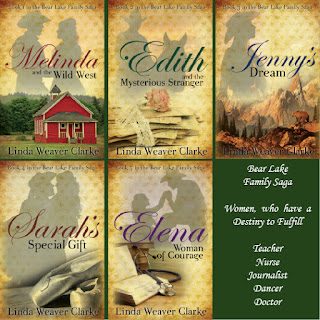 Today I am so happy to once again have author Linda Weaver Clarke as a guest on my blog.  This is an author whose books I love to read.  I think the Bear Lake Family Saga Series is probably my favorite of all!  If you haven't had a chance to read this series, I would highly recommend it!

Who is Author Linda Weaver Clarke?

I was raised among the Rocky Mountains of southern Idaho and live in Color Country in southern Utah. I am the author of 23 books. I have several genres that I write in—a Historical Romance series: Bear Lake Family Saga, a Mystery Suspense series: The Adventures of John and Julia Evans, a Cozy Mystery series: Amelia Moore Detective Series, and a Period/Adventure Romance: The Rebel Series. I am also a missionary at the FamilySearch Center. I help people find their ancestors and learn about their heritage.

This series has strong female characters who have a destiny to fulfill. Each woman wants to make a difference in someone’s life. No matter the trial that comes her way, she is ready to fight for what she believes. I love the male characters. Even though they are strong and masculine, they have their tender moments that can melt your heart. Bear Lake Family Saga has plenty of adventure along with a tender love story.

What was the inspiration for this series?

My ancestors were my inspiration. I was writing their histories so my children would learn to appreciate their heritage. Their stories were intriguing and full of adventure. When I was done, I decided to write a historical romance series and give these true experiences to my fictional characters.

Give us a brief description of each story in this series?

Melinda and the Wild West (Book 1): Melinda is a schoolteacher. She has many challenges but it’s a rugged rancher who challenges Melinda with the one thing for which she was least prepared—love.

Edith and the Mysterious Stranger (Book 2): Edith is a nurse. When a mysterious stranger starts writing to Edith, she gets to know a man's inner soul before making any harsh judgments. Whoever he is, this man is a mystery but is he as wonderful in person as he is in his letters?

Jenny’s Dream (Book 3): Jenny is an aspiring author. She has a dream to fulfill, but the only thing standing in her way is an unpleasant memory, which has haunted her since childhood. She must learn to forgive before she can follow her dream.

Elena, Woman of Courage (Book 5): The Roaring Twenties was a time of great change, when women raised their hemlines and bobbed their hair. As Elena fights to prove herself as the town’s first female doctor, the town’s most eligible bachelor finds it a challenge to see if he can win her heart.

Are your books in audiobook form?

Yes. I have a narrator who is narrating them for Audible. I have one narrator for Melinda and the Wild West, and then changed to a different narrator for the next four. Carolyn Kashner actually sings in Edith and the Mysterious Stranger, and she has such a lovely voice.

Who is the most intriguing character in this series?

I love all my female characters, but I feel that Elena from Elena Woman of Courage is the most interesting. She has to endure a lot of prejudice from the town bully who feels that women doctors have no right to practice medicine. But that isn’t all. This story takes place during the roaring twenties, and Elena has decided to be a part of this new generation by bobbing her hair and raising her hemlines. That takes a lot of courage. Of course, the town’s most eligible bachelor finds her most intriguing. He actually admires her tenacity. I admire Elena, as well.

(For history buffs: Bobbed hair caused a lot of commotion. A teacher in Jersey City was ordered to grow her hair back by the school board or she would be fired. Women with bobbed hair were fired from prestigious department stores without any warning. A preacher pounded the pulpit, saying that a “bobbed woman was a disgraced woman.” The raising of hemlines had its problems, as well.)

They developed a new vocabulary during the roaring twenties. What were some of the words you discovered while writing this story?

This was the fun part of writing Elena Woman of Courage. During this time period, they spoke a language foreign to their parents.  Here are some examples.

Where can readers find you?

My website has sample chapters to read: www.lindaweaverclarke.com
My Audible Page: https://www.audible.com/author/Linda-Weaver-Clarke/B004P47EWO
My Book Trailer:

To enter the contest, tell me why you love historical romances in the comment area.  Please state in your comment, as well, whether you would prefer an ebook or Audible audiobook.  We will have a winner for both an ebook and an Audible!  The contest will run from now till July 14th, 2018.  Please leave your email address in a safe format so that we can contact you if you are the winner!