Anne Frank in the Secret Annex Who Was Who? Published by the Anne Frank House 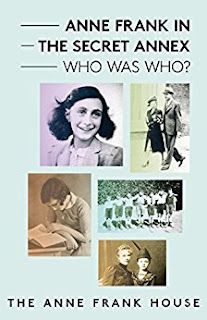 This book has a special meaning to me.  Not simply because it was the diary of a victim of the Holocaust, but it has a personal meaning to me, as well.

Many years ago in high school, our drama department put on the play Anne Frank.  I was chosen to be Edith Frank, mother of Anne.  It was the first play I was in, and from then on, I was in every play I could be in.  Being in the play brought a deep understanding of the events of this young girl's life.  The emotions of performing in the play were very deep for our entire cast and especially for me, whose mother was in a prison camp in Czechoslovakia at the end of WWII.

Having been in the play, although long ago, I remembered the names of all the characters and when I was fortunate enough to visit the Anne Frank house about two weeks ago in Amsterdam, I noticed the surnames of the other individuals were different than in the play.  As we exited the house, there was a shop with many books and so I purchased this one to get some clarification on who was who!  I found that pseudonyms were used and what the names of those persons actually were.

I found the book very helpful and interesting and having known the story well, it was interesting to read about the others, and the helpers, as well.  The book has many pictures of the family and other persons involved.

It was very interesting and helpful.  It is available at this  link.