Forever Her Hero by Belle Calhoune 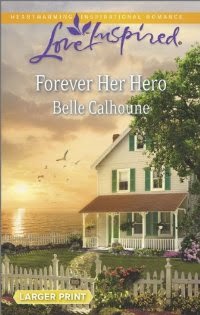 This sweet book by Belle Calhoune was a fun read.   The book takes place in Cape Cod and Ava, a widow with twins reunites with her childhood friend, who also happens to be the cousin of her late husband.

She finds herself having feelings for Sawyer Trask, despite the unhappy father of her late husband, Billy who makes it known that a relationship between the two would be disrespectful to his son's memory.

However, he is withholding a secret which may destroy the relationship he hopes to share with Ava.  He is torn as to whether he can relate this to Ava, but without doing so, he will never be able to move on. It is a book about healing, forgiving and caring about others.

The story is a very nice read and I enjoyed it very much.
Posted by Sonja at 7:00 PM