The Nutcracker Bride by Margaret Brownley 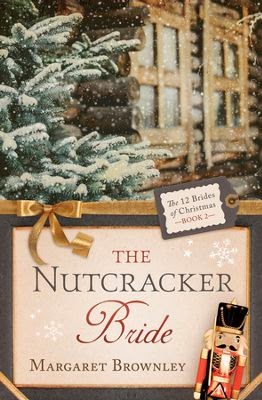 This was a beautiful story about Lucy Langdon who during the time of 1880, while picking walnuts hears several horses approaching at a fast pace and one of the riders throws something in her wagon.  Lucy finding something totally unexpected in the wagon, money, and lots of it, is not sure what to do about it.  The cold December day does not make reporting this incident to the local authorities easy for her, especially while having to take care of her aged grandfather.

Her German grandfather, whom she calls “Opa” which is the German version of grandpa, tends to worry her because she isn’t sure if he will walk away or not, his mind no longer functioning as it should.  She is now concerned as to whether there are unscrupulous thieves waiting to break into her home, looking for the pouch of money left which had been left in her wagon.  She hides the pouch and later when someone approaches her home, is not sure if this is a “good guy” or a “bad guy”.
Texas Ranger Chad Prescott had been riding and searching for a band of thieves.  And was near her home and she had no idea who was making the noises that she heard.  Was it the thieves?  Her shotgun that she carried went off and she wasn’t sure whether she had killed or injured anyone as someone began yelling and banging on her door to let him in.  Who was this person and what did he want?

She finds herself fearful yet he convinces her to open her door.  It is the person she has accidentally shot.  And it becomes necessary for her to care for him.
Lucy provides for herself and her grandfather through her baked goods.  Her house is over-filled with nutcrackers and Texas Ranger Chad Prescott is surprised to see them all, made by her German grandparents.

I enjoyed the story of their meeting and circumstances.  It was a fun read and Book 2 in the 12 part Christmas Bride Series.  You will enjoy this read and also the nummy German Cookie recipe at the end.  Can’t wait to try it!